A long-lived XSS vulnerability was patched in WordPress 5.4.2. It allowed any authenticated user, with privileges to create or edit a post, to embed arbitrary JavaScript  within the post. When the post was later viewed the code executed in the context of the site.

Here is a video demonstrating the issue:

The embedding functionality will fetch HTML from a user supplied URL and attempt to embed it securely within the target site. This is done by only allowing the embedded HTML to contain a limited set of tags (iframe and blockquote) and strictly limiting the attributes allowed on these elements.

The vulnerability occurs due to a filter function “wp_filter_oembed_iframe_title_attribute”, this was run after other sanitisation has taken place:

This function looks for the title attribute of the first (usually only) iframe element, then attempts to remove the value in the highlighted line.

This can be abused to cause other attributes to exist on the iframe tag, by supplying html such as:

Here the two IFRAMEs have the following attributes:

When line 33 is executed, every occurrence of the string:

will be removed. So:

Which gives IFRAMEs the following attributes:

The JavaScript added to the onload attribute was executed whenever this post is viewed.

The design of WordPress means XSS bugs are particularly impactful.

@g0blinResearch wrote an excellent article some years ago (https://g0blin.co.uk/xss-and-WordPress-the-aftermath/) describing the impact of XSS on WordPress. The payloads demonstrated within both still work today with some small modifications, meaning that provided an administrative user views our post we can take complete control of the site.

To exploit the issue an attacker needed to host two files on a web server under their control (the content of these files is shown later). For exploitation to work the victim server must be able to access the attacker’s web server to download the payload.

Robust outbound controls on the server-side would prevent exploitation. However, enabling such security controls would prevent WordPress from embedding any URLs which is a practical necessity and is therefore rarely implemented.

We created a payload based on the article above. This modified the plugin file to edit to “hello.php” which is present and accessible by default on all WordPress instances and made a few other minor alterations.

In this demonstration we hosted “payload.htm” at

Note: the full encoded payload has been truncated to avoid it being trivially weaponised before vulnerable sites can be updated.

Now we login to the victim site as a user with at least contributor permissions and create a post which embeds our content: 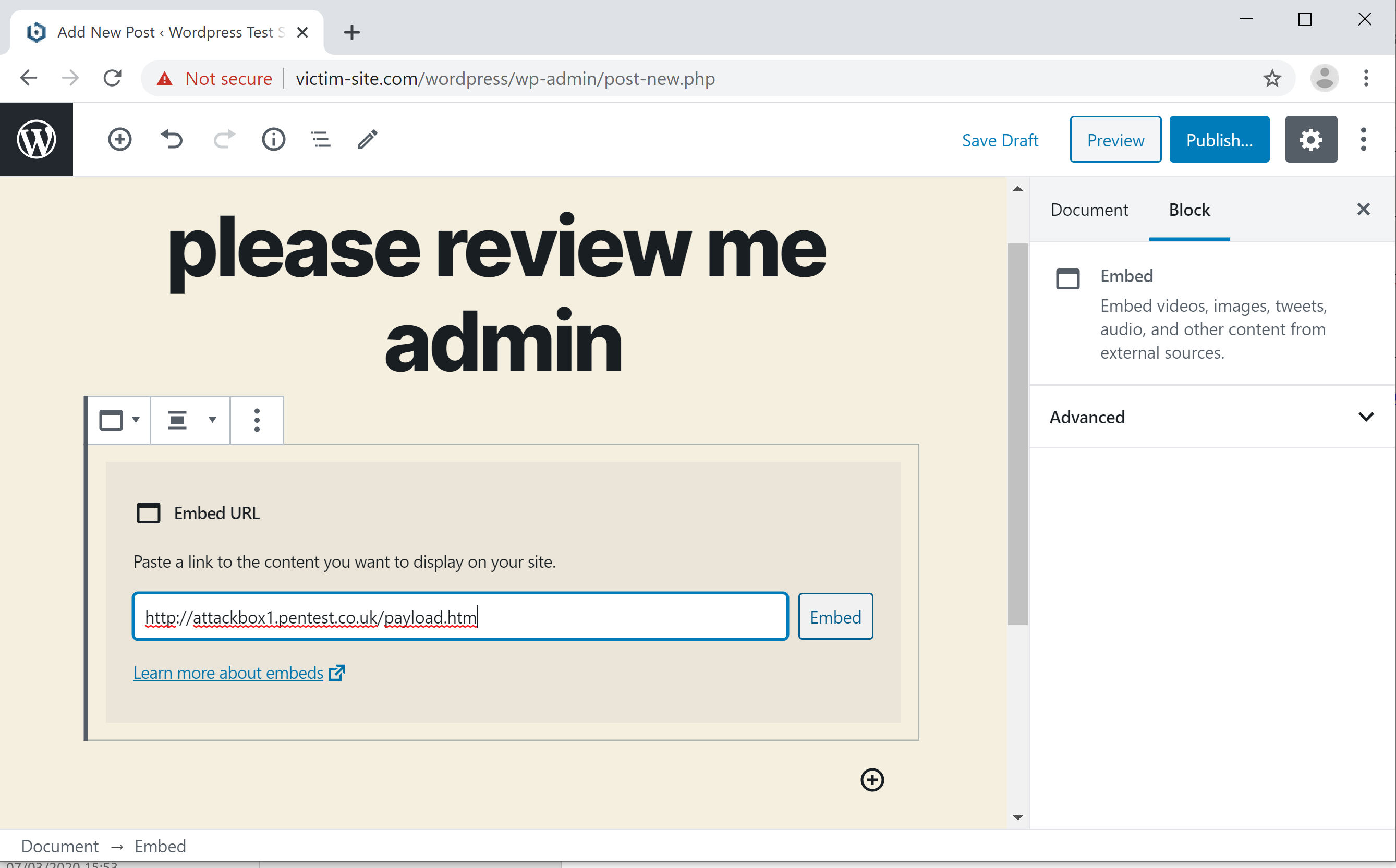 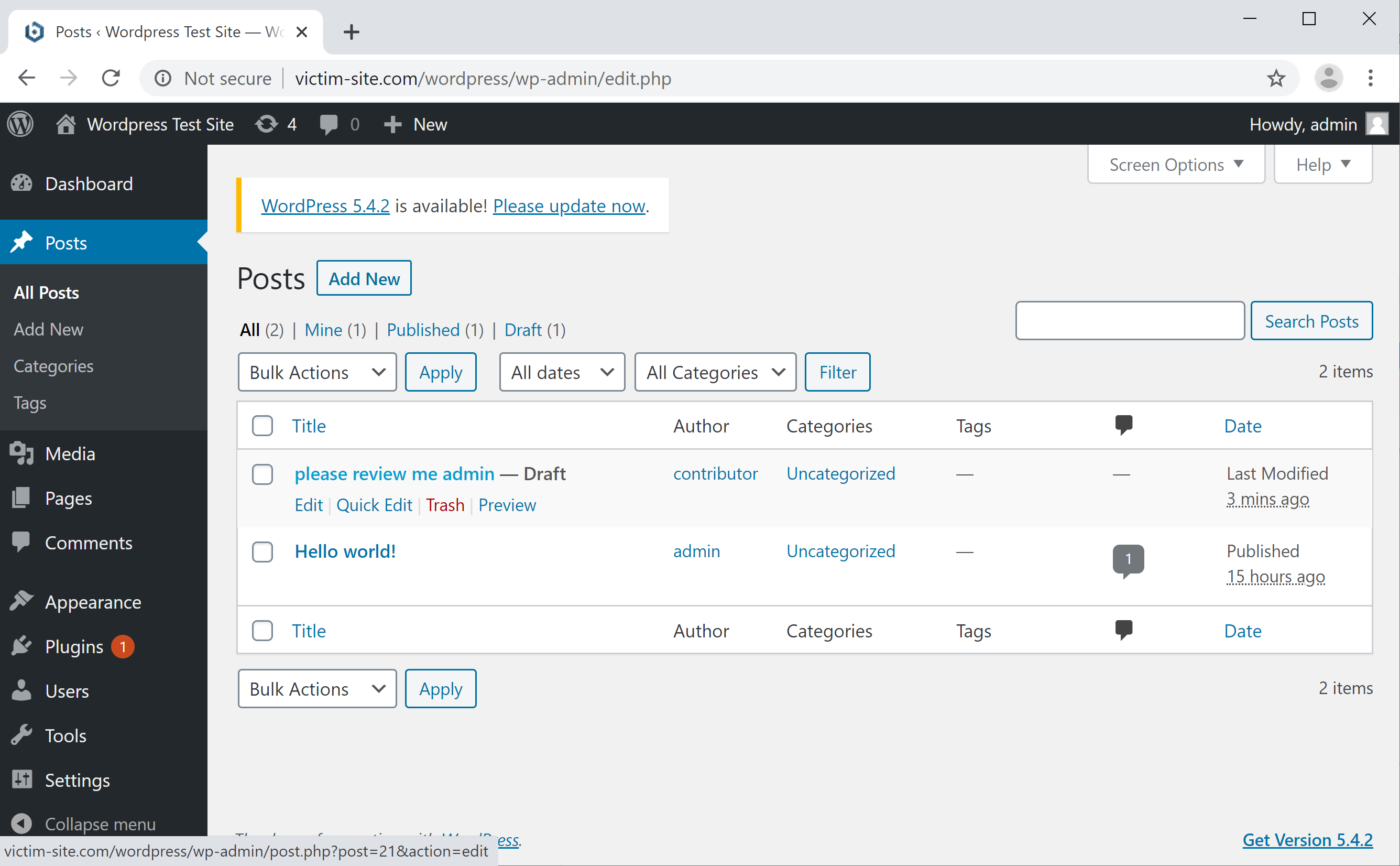 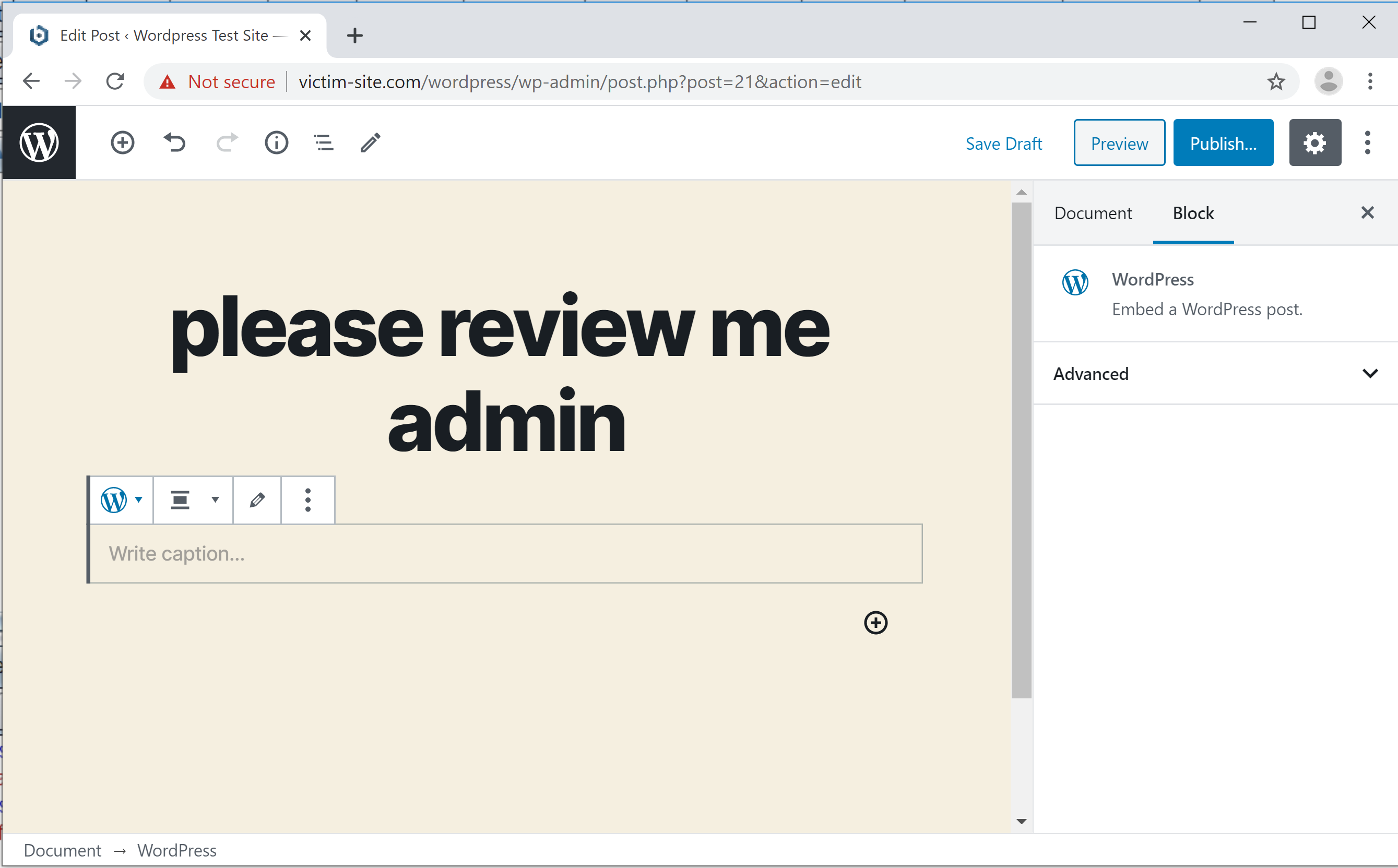 Our payload is executed, and the file hello.php is modified to allow us to execute arbitrary system commands: